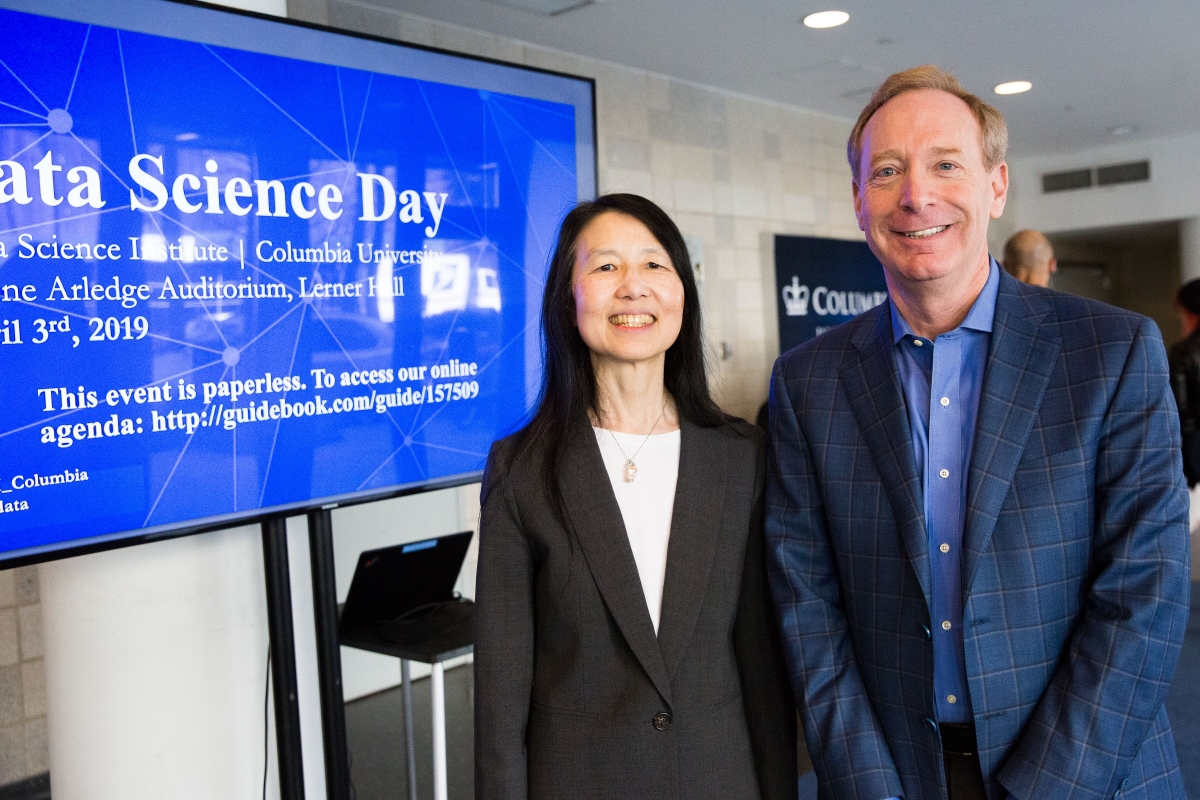 The deep impact of Columbia’s annual Data Science Day was on full display during the Q&A session for “A Private, Safe, and Secure World.”

With a question for Professor Ronghui Gu on building trustworthy blockchain ecosystems, a young man stood up and was asked by the moderator to identify himself. An appreciative and hearty round of applause followed his unexpected and tentative response: “Oh, I am a junior in high school from New Jersey,” he said.

This is an underlying mission of The Data Science Institute at Columbia University—to train the next generation of data scientists and to advance the state-of-the-art of data science.

With more than a thousand attendees, including students, faculty, industry affiliates, researchers, alumni and, as it turns out, prospective college students, Data Science Day offered an unparalleled opportunity to experience the depth and scope of the University’s most innovative data-science research.

The day kicked off with an opening address by Jeannette M. Wing, Avanessians director, Data Science Institute, professor of Computer Science at Columbia, who detailed the Institute’s mission to push the research frontiers of data science; transform all disciplines through data science; and use data for good.

“Today, data science is headline news,” Wing said. “Every day we are reading stories about how artificial intelligence is transforming industry; about major advances in deep learning; new pathways to enhance patient care with predictive analytics; and the ethical questions surrounding using big data and AI.”

“Data Science Day is our moment to showcase our pioneering research,” she added, and to “celebrate our engagements with industry.”

The day’s keynote speaker, Microsoft President Brad Smith, was introduced by Wing. Before arriving at the Institute, Wing worked at Microsoft as Corporate Vice President of Microsoft Research, overseeing a global network of research labs.

“Brad is an exemplar of how to balance technology, policy, and business,” Wing said. “He has called for a digital Geneva convention to address internet security, argued that we need to regulate face recognition technology, and most recently called the tech community to take action after the New Zealand attacks.”

At Microsoft, Smith’s work is focused on the ethics of AI, cybersecurity and democracy, and he has influenced and continues to influence the direction of technology. During his keynote address, “Privacy and Security in a Digital World,” he discussed his views on ethics and Al.  Click here to read an IEEE Spectrum story about Smith’s talk.

Smith also described how “AI is infused in every aspect of our lives, like electricity. We are basing our lives on this technology, so more than ever we must earn and sustain the world’s trust.” He added that to do this it’s imperative that experts in the social sciences and the humanities collaborate with technologists to create technology that serves the ethical interests of society.

He summed up his talk by quoting Einstein: “What the inventive genius of mankind has bestowed upon us in the last hundred years could have made human life carefree and happy if the development of the organizing power of man had been able to keep step with his technical advances.”

Smith ended by saying that Einstein’s quote was prescient and that the ability to organize technology “needs to be our overriding goal.”

Mark Hansen, David and Helen Gurley Brown Professor of Journalism and Innovation, promised that by end of his presentation we will “unanimously agree that the 2020 U.S. census is the sexiest topic to discuss.” During his talk, “To Reduce Privacy Risks, the Census Plans to Report Less Accurate Data,” Hansen spoke about whether the privacy protections the Census Bureau offers Americans is strong enough and the implications about reporting less accurate data.

Tamar Mitts, Assistant Professor of International and Public Affairs, talked about “Global Radicalization in an Internet Age.” Professor Mitts merges data science and machine learning to examine the dynamics of conflict and political violence, with a focus on the causes and consequences of radicalization and violent extremism. Her research found that even though people tend to associate ISIS propaganda with heinous acts of brutality—beheadings, murder, and the like—Mitts discovered that such violence was, more often than not, counterproductive to the group’s aims. “The most interesting and unexpected result was that when these messages were being coupled with extreme, violent imagery, these videos became ineffective,” Mitts said. In other words, the savagery for which ISIS became famous did not appeal to the majority of its followers; positive messaging found greater success. Her talk was covered in Fortune magazine, “Do Violent Videos Radicalize People?”

And Andrea Baccarelli, Leon Hess Professor of Environmental Health Sciences opened his talk with a slide saying, “Ninety percent of human diseases are attributable to environmental causes.” Baccarelli develops biosensors of environmental exposures and algorithms that can reveal someone’s true biological age as well as to predict whether a person is a smoker.

After the presentations, students’ and faculty presented research posters and demos that highlight the multi-disciplinary research at Columbia.

At day’s end, the winners of the “People’s Choice Award – for Best Demo and Best Poster 2019” were announced. For best poster, a team of students working under the direction of Physics Professor Georgia Karagiorgi won for a research initiative known as DUNE (The Deep Underground Neutrino Experiment). DUNE will consist of two neutrino detectors which will enable scientists to detect and transform our understanding of neutrinos and their role in the universe. 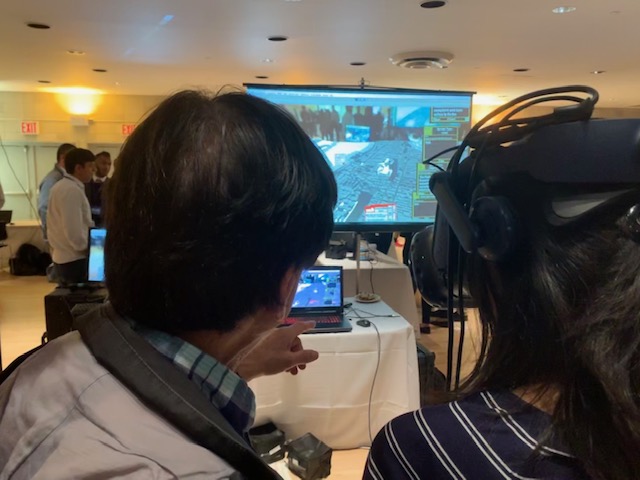 And a research team from the Computer Graphics and User Interfaces Lab, directed by Professor Steven Feiner, won the prize for best demo. The team demonstrated an AR/VR system that allows multiple users to virtually explore data associated with an urban environment.

The day showcased the spirit and dedication surrounding the relatively new field of data science—a spirit best captured by Director Wing’s concluding remark, “We are grateful that you are part of our future as we push the research frontiers of data science, transform all disciplines through data science, and as is foundational to our mission, use data for good.”