The team is comprised of researchers from the Data Science Institute and the Columbia Astrophysics Laboratory. The astrophysicists are part of the LIGO Scientific Collaboration, a group of more than a thousand scientists who worked on the instrument that detected the gravitational waves. With this one million dollar grant, Columbia will continue to assist LIGO with instrumentation, data analysis and astrophysics.

“We’ll need to eliminate a large number of data sources and isolate the signals we are searching for,” says Szabolcs Marka, a Columbia astrophysicist and affiliate of the Data Science Institute. “It’s a difficult undertaking – the detectors need to measure the stretching of spacetime itself yet with this grant we hope to add to LIGO’s historic breakthroughs.”

The Columbia researchers will use machine learning and other advanced techniques to filter out any extraneous data picked up by the detectors. The two LIGO observatories have detectors that collect enormous amounts of space data.

Each detector has 200,000 data channels that describe where the space data originated from as well as the phenomenon that produced it. It’s impossible to manually monitor these data channels, and even harder to find complex correlations in the channels that contaminate gravitational-wave data. The detectors can detect the echoes of cataclysmic cosmic events such as the birth and death of black holes.

The wave signals are so elusive, though, that they escaped detection for a century after Einstein predicted their existence. But in 2015, LIGO had its monumental breakthrough – detecting gravitational waves for the first time – a discovery that gave scientists renewed hope for understanding the hidden layers of the cosmos.

The Columbia team is well suited to deepen that understanding; its four members have several decades of experience in their fields. Marka, along with Imre Bartos and Zsuzsanna Marka, are astrophysicists, while John Wright is an electrical engineering professor at Columbia Engineering. All four are affiliates of the Data Science Institute.

“The LIGO project aims to understand the structure of the cosmos,” says Wright, “which is what makes this project so idealistic. We’ll create the tools – the algorithms, the models and the machine learning techniques – that our LIGO colleagues need to interpret the data, remove ‘noise’ and tease out new gravitational-wave signals. It will be really exciting to see how far we can go with this.” 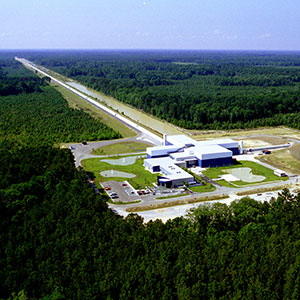 Zsuzsanna Marka, an astrophysicist, says it’s hard to fathom the complexity of LIGO, a detector network with two sites 1,865 miles apart – one in Livingston, La., and another in Hanford, Wash. Each site holds vacuum chambers arranged in an L-shape whose arms span 2.5 miles, she says. Lasers shoot beams along those lines and measure tiny displacements, smaller even than the size of the atoms. Given that complexity, she’s of the work that Columbia has done for LIGO.

“Columbia built the complete timing system for advanced LIGO,” Zsuzsanna Marka says. “Time is essential in figuring out the direction in which we hear two black holes colliding. Reliable timing is also essential in controlling the instrument. Nothing could work without it. Columbia was part of the team that built and switched on advanced LIGO.”